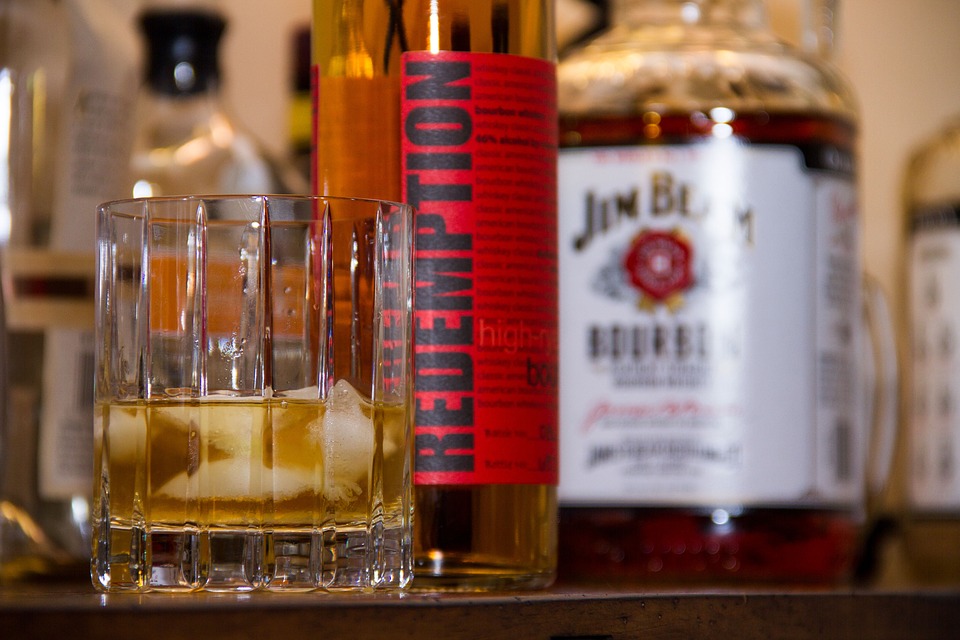 Whiskey is a drink loved by many, and it comes in different varieties. Let us look at the two favorite whiskeys and their difference. That is rye and corn bourbon. But first, why does the whiskey change? You would be forgiven for thinking that whiskey is just whiskey!

Whiskey is produced from the distillation of fermented grain mash. This mash is mostly made up of different types of grains combined to form a “mash bill”. The mixture is then heated and mixed with water to help form sugars that ferment into alcohol. The resulting liquor is distilled and finally placed in wooden barrels for the aging process.

Therefore, the change comes from the type of grain used, the distillation process, and the aging process. Any change in any of the methods brings about a different kind of whiskey.

It is important to note that rye was produced in the States in the early years, before the ‘discovery ‘ of corn. Corn was cheap to produce and was used to make whiskey in place of rye. The popularity of rye was very high before the Prohibition time (the law that prohibited any alcohol production and consumption). Still, then bourbon became popular after Prohibition. However, over the years, rye has started to regain its popularity.

Differences between rye and bourbon

Of course, both rye and bourbon have got similarities just as much as they have differences. While some similarities may come up, the main focus is on the difference that makes each drink unique.

The significant difference between bourbon and rye is in the grain used to make each. Rye is made from a mixture of a grain mash that contains 51% rye, while bourbon or American whiskey is made with a mash bill; they have 51 percent corn. This also gives each whiskey very distinct flavors.

The mash bills for both bourbon and rye are crushed and mixed with water. For bourbon, a sour mash is added to the mixture, which does not happen with rye.

Yeast is then added to the mixtures to help ferment. The alcohol produced is distilled and then put into barrels for aging. They both have to age in new charred oak barrels.

Due to the difference in their production, both rye and bourbon taste very different. Bourbon tends to have a softer profile with tastes of caramel, while rye is spicier.

Rye has a spicy flavor that tastes a bit dry. You can get different tastes in the rye too. Some rye will be bold that give your throat a spicy sting, while others may start harsh, but in the end, they “thin out”. Others may start softer and gradually become involved as you continue to drink it.

The rye whiskey’s most common flavors are pepper, nutmeg, cinnamon, cloves, and spices. Rye also has some notes of fruity flavors like pears, peaches, cherries, and apples. The more the aging, the more the flavor becomes intense. You will most likely taste this type of whiskey at the back of your tongue.

Bourbon is sweet and has a full-bodied taste. This is due to the corn that is used in its production. The consistency of bourbon is also very smooth; it flows smoothly and does not develop flavors as you sip it.

Bourbon flavors will include caramel, maple syrup, and vanilla. The more bourbon is aged, the more it becomes sweeter to the palate.

There is quite a variety of American Whiskey styles, bourbon;

This is the standard type of bourbon whiskey that is produced with at least 70% corn, 15% rye, and 15% barley in its mash bill.

This is a bourbon that has a higher quantity of rye grain mixture as the secondary ingredient. The rye in the bourbon gives it a more spicy taste.

Here, the mash bill has a high content of wheat as the secondary ingredient. This type of bourbon is lovely.

Judging from the name, this is a type of straight bourbon and native spirit that is made in Tennessee. This bourbon is passed through a filter with charcoal before the aging process, which gives it a distinct mellow flavor.

This bourbon is said to be quite affordable. It is made mainly for sale in Kentucky. You get to enjoy the difference in flavor of caramel and oak when you drink it.

This is a wheated bourbon that offers sweetness and softness to die for. It has a full-bodied taste and intense flavor but is still soft to the palate. It is produced in Heaven Hill.

The main focus for rye whiskey is the amount of rye in its mash bill, and not necessarily the other ingredients. There are only two types of rye whiskeys;

This is a rye that meets all the requirements needed for producing it majorly in the U.S. Its production is highly regulated. Therefore it is consistent in quality because of the kinds of grains used. It is required to have a mash bill of 51 percent rye, distilled at no more than 160 proof and aged in new charred oak barrels.

This type of rye is produced in Canada and has no regulations that are governing its production. The whiskey may even be made entirely of corn but will still be called ‘rye whiskey’.

This is one of the most popular malted barley rye whiskey in the market. It is believed to be friendly to the pocket and easy to find. It’s most prominent flavor is that of spice, with an after taste of vanilla. You will also taste some bit of proper and sweet orchard fruits.

It is nicknamed, ” The Good Stuff.” This whiskey has quite a rich history. Distilled in Templeton, Iowa, it has a rye mash bill of 95%. It is full of grassy flavor with notes of spice, fruit, and fudge.

To have bourbon or rye for your cocktail

This may be a dilemma for some, so it is essential to ask yourself, ” Do I need a sweet or spicy drink?”

The sweet flavor of bourbon street will go well with a whiskey sour or summer drinks. The dryness of rye, on the other hand, will go well with Manhattans. The basic rule or assumption is that if your whiskey is already sweet, adding some rye will give it some balance while adding bourbon will make it excessively sweet.

The battle of supremacy between bourbon and rye will always ultimately come down to personal preference.

Here is a quick summary;

The least time needed for the aging of rye whiskey is two years. After this, most distillers transfer the whiskey into other previously used barrels to bring about different rye tastes.

If you intend to have a long conversation with that old-time friend, then rye would be your go-to drink. But then again, it is all about what you enjoy! Good luck experimenting with different alcohol-content drinks!